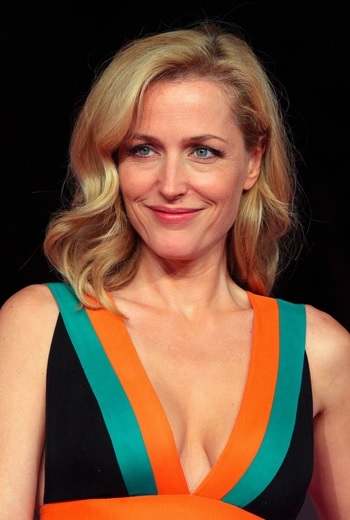 "Just remember, you can do anything you set your mind to, but it takes action, perseverance, and facing your fears."
Advertisement:

Gillian Leigh Anderson, OBE (born August 9, 1968 in Chicago, Illinois) is a film, television, and theatre actress. She is best known to the general public as FBI agent Dana Scully from The X-Files. She also frequently appears in Period Drama pieces. She has also started moving into novels, with the science fiction series The EarthEnd Saga.

She is involved in many charity projects. She is on Twitter

and has a very detailed official webpage

She's been married twice to men and also had two long-term male partners, with three children from her relationships. Additionally, she's had relationships with women in the past and stated for her attraction is not based on gender, but hasn't used any LGBT+ term for herself.