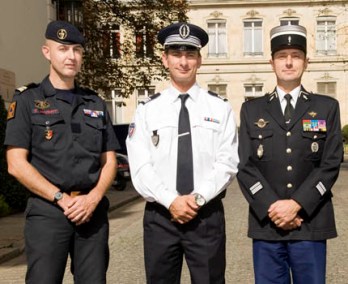 "Vos papiers, s'il vous plaît." note Left: Customs member, Center: policeman, Right: gendarme.
"Nobody is not afraid of a policeman from France. That is why this hat is so effective."
— Description of L'Inspecteur, Team Fortress 2
Advertisement:

There are basically three sorts of French police officers on the national level, as well as municipal forces:

French Policemen, like their equivalents all over the world, have many nicknames : flicsnote From a Yiddish word meaning flies., keufs note Short for "keuflis" (which almost no one ever uses) which is "flics" backwards , pouletsnote Meaning chickens and coming from the fact the Paris Central Police Station was built on a former bird market in 1872. However, poulet is NOT slang for coward, unlike the English chicken, so this interpretation is erroneous., maison poulaganote related to poulets, means roughly henhouse in French or maréchausséenote "Marshalry" : mostly used in the countryside, refering to the police force that became the Gendarmerie.