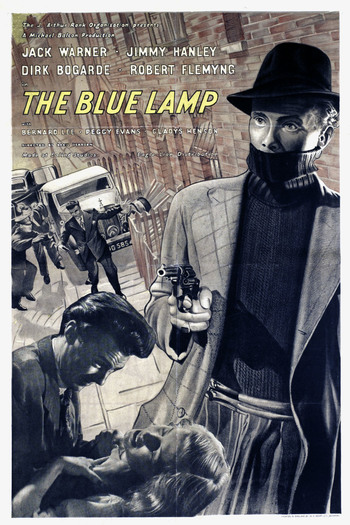 The Blue Lamp (1950) is a famous British Police Procedural film that topped the total UK box office charts in its year of release and spawned the long-running TV series Dixon of Dock Green. In a celebrated example of Spared by the Adaptation, the character George Dixon, played by Jack Warner, was the protagonist of the TV series despite being murdered in the film.The film is a rare example, and one of the best-remembered, of a serious, dramatic work by Ealing Studios. In an atmospheric setting of post-war West London, with rationing still in force and the city scarred by bomb sites, it tells the parallel stories of two young men, New Meat police constable Andy Mitchell (Jimmy Hanley) and Delinquent Tom Riley (Dirk Bogarde), whose criminal career will climax and end in PC Dixon's murder.

The Blue Lamp contains examples of: