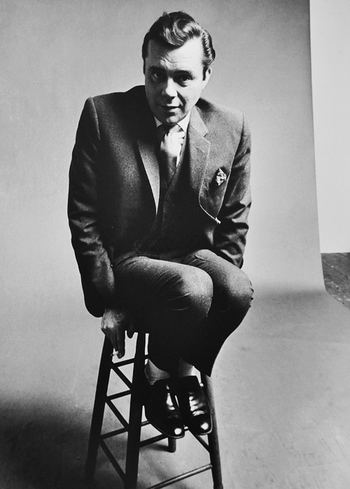 "First there was the war and then the peace to cope with, and then suddenly I was a film star. It happened all too soon."
Advertisement:

His career began on the British stage in 1939, shortly before he joined the Queen's Royal Regiment during World War II. During his time in the war, he served in the Air Photographic Intelligence Unit and was one of the first Allied soldiers to reach the Bergen-Belsen concentration camp, the latter of which left an indelible mark on Bogarde for the rest of his life.

Upon his return to his acting — now christened "Dirk Bogarde" thanks to his agent — he was contracted by the Rank Organisation where he didn't make much of an impact until getting a plum role in 1950's The Blue Lamp, which became the most successful British film of that year. It was then — with the addition of the Doctor film series a few years later — that Bogarde's star was on the rise.

It wasn't long until Hollywood came knocking on Bogarde's door but in their attempts to market him as "the British Rock Hudson"note which turned out to be true in more ways than one, the films he was in such as The Song Without End (where he played Franz Liszt) and The Angel Wore Red (alongside Ava Gardner) flopped, and — as the saying goes — he never worked in that town again.

After leaving the Rank Organisation in 1960, Bogarde cast aside his matinee idol image in favor of more challenging roles. One of them was the lead in Victim (1961), which some feared would've been career suicide to play a closeted gay man in a time when male homosexuality was still a criminal offense in the United Kingdom. But Bogarde paid no mind; for his work in the film, he earned a BAFTA nomination for Best Actor. (He would ultimately win the award for his work in The Servant and Darling.)

By 1977, Bogarde took on a second career as a writer. He would go on to write nine volumes of memoirs and six novels, as well as essays, reviews, poetry, and collected journalism.

Bogarde always denied that he was gay (perhaps owing to the knowledge that such behavior at the time could've both ended his career and landed him in prison) but would later admit to being in a long-term relationship with his manager Anthony Forwood. (He attracted some criticism in writing about his relationship with Forwood in his memoirs as strictly a professional one.) After Forwood's death in 1988, Bogarde became reclusive and only made one more film — Daddy Nostalgia alongside Jane Birkin — before retiring.