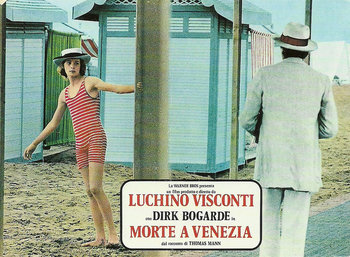 Morte a Venezia is a film by Luchino Visconti made in 1971. Its translated title is Death in Venice. It is an adaptation of a novella by Thomas Mann of the same name written in 1912.

It is set in pre-WWI Venice. Main character Gustav von Aschenbach, a middle-aged intellectual (played by Dirk Bogarde), arrives in Venice. There he stays in the hotel where he notices a big Polish family. He falls in love with a teenage boy, Tadzio. Much longing ensues as the main character observes the boy.

Then an epidemic breaks out in Venice. The protagonist wants to leave but then changes his mind. He goes on following the boy around the city from some distance. Meanwhile Venice decays as the disease takes its toll. Cholera in this movie might be a metaphor for the looming WWI.

A documentary chronicling on actor Bjorn Andrésen's time playing Tadzio and the aftermath, The World's Most Beautiful Boy, was released in 2021.