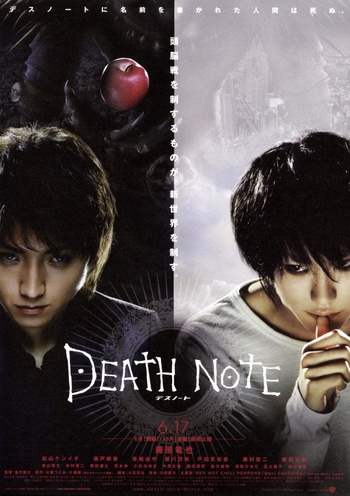 "I am justice."
Light: The law has its limits.
Shiori: There are limits to everything.
Advertisement:

Death Note is a film adaptation based on the manga of the same name, which was written by Tsugumi Ohba and illustrated by Takeshi Obata. It was released on the 17th of June, 2006, and it is the first in Death Note Series. This film is part one of a duology, with its sequel, Death Note: The Last Name being released five months later.

Light Yagami (Tatsuya Fujiwara) used to be a normal university student, resenting criminals who constantly defied the flawed Japanese justice system. This all changes when a Shinigami, Ryuk (Shidou Nakamura), drops a notebook that Light finds. With the notebook's newfound power of killing anyone whose name and fate are written, he decides to rid the world of all criminals, eventually assuming the identity of 'Kira'. But one single man stands in his way: L (Kenichi Matsuyama), one of the greatest detectives in the world, igniting a showdown between the two greatest minds where no one is safe...

In 2009, Vertigo Entertainment, the production company behind the 2000s era American remake of Asian horror movies such as The Ring and The Grudge, acquired the American remake right of this film, and released it on Netflix in 2017.