This film contains unmarked spoilers for Death Note. You Have Been Warned! 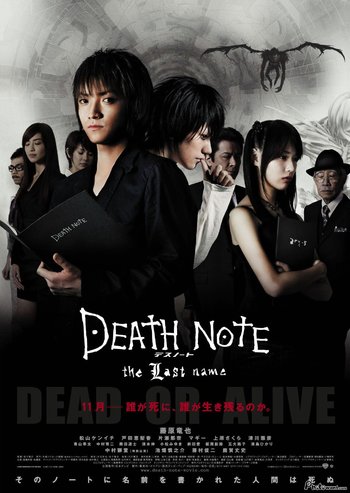 Whose name will be written in the end?
"There are times when you have to make sacrifices."
— Light Yagami
Advertisement:

Death Note: The Last Name is the second part of a film adaptation based on the manga of the same name, which was written by Tsugumi Ohba and illustrated by Takeshi Obata. It was released on the 3rd of November, 2006, and it is the second in the Death Note Series. This film continues from the preceding instalment, Death Note, released five months prior to this film.

Having been accepted into the Investigation Team, Light Yagami (Tatsuya Fujiwara) sets out to destroy not only L (Kenichi Matsuyama), but the other members before they expose his identity as Kira. He ends up finding those that can give him the advantage to kill his enemies. They consist of the celebrity Misa Amane (Erika Toda), who possesses another 'Death Note', and her Shinigami, Rem (Shinnosuke Ikehata). But when complications arise, Light is forced into pulling off his biggest and riskiest gambit yet. Will this help succeed in keeping his crimes hidden, and allow him to take his rightful position as the 'God of the New World'? Or will he finally lose to the one person at an intellectual footing with him?

♫ Deep beneath the cover of another perfect wonder
Where it's so white as snow
Privately divided by a world so undecided
And there's nowhere to go... ♫