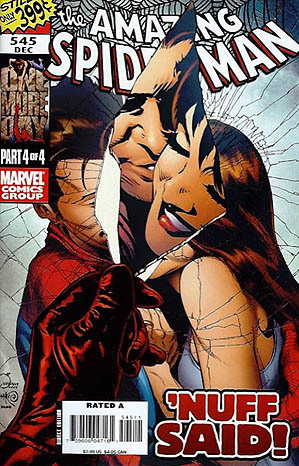 It used to be thought that superheroes had to be single in order to be interesting protagonists. After all, a single superhero is a mobile superhero; it's easier to suddenly drop everything to go fly into space and have adventures with the Space Princess of Neptune when you don't have a wife and kids waiting at home. And besides that, everybody knows that comic book readers are lonely, single guys anyway. So why bother them with something they can't relate to, like a committed relationship?

As such, superheroes afflicted with this trope are never, under any circumstances, allowed to settle down with anyone. (At least, not in the main canon.) Unlike the Celibate Hero, they may actually date, but expect them to say "It's Not You, It's My Enemies," and other excuses of varying plausibility. If they actually do show signs of planning to settle down with someone, expect the Cartwright Curse to rear its ugly head, resulting in the love interest getting killed off, Put on a Bus or otherwise removed from the hero's life before story's end or somewhere further down the line. If both do survive and stay together long enough to marry or even have their own kids in the main timeline, the work may even go as far as to smash the Reset Button, Cosmic Retcon it into oblivion, make it All Just a Dream, or inflict some other form of Diabolus ex Machina to undo everything and appease the almighty Status Quo.

Compare Cartwright Curse, True Love Is Boring, and Shipping Bed Death, which may lead to this in more romance-focused works such as Lois & Clark.

Related to The Masquerade Will Kill Your Dating Life and Loved I Not Honor More.