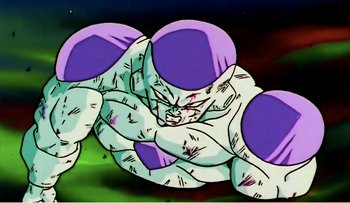 JK, not dead, LOL.
Smith: Tearjerker?! But he's dead!
Bullock: Why would you think that?
Smith: Because he fell in a volcano!
Bullock: As long as you fall the right way, a volcano can never hurt you. Everyone knows that.
— American Dad!
Advertisement:

Any situation where the bad guy has been dealt a mortal blow which they could not possibly have survived, and it looks as though The Hero has won — but a couple of scenes later comes the twist: they're Not Quite Dead. On the contrary, they're back, ready for more, and madder than hell.

Maybe they were rescued from certain death by their right-hand man. Maybe they were spared by a healing spell — or in more drastic cases, upgraded to One-Winged Angel status by way of Emergency Transformation, or a case of We Can Rebuild Him. Maybe they're just that hard to kill. Either way, the fight isn't over yet.

Compare Only Mostly Dead and Almost Dead Guy. Often happens after not finding the body. There may or may not be some overlap with Staying Alive. It can be shown by having their eyes open, hand poking out of rubble, or fingers twitch. Not to be confused with The Undead or Back from the Dead. If a villain does this a lot, it's probably because they have Joker Immunity. This can also be a character who's Made of Iron because they're just that strong. Often results in Who Needs Their Whole Body? Because of this trope, any Genre Savvy character will Make Sure He's Dead. Characters who cause Hydra Problems tend to also do this at least once before it's made clear that almost killing them helps them.

The Living Dead is when this happens unintentionally due to Special Effect Failure revealing the "corpse" is played by a live actor.


You thought I was done, didn't you!? Think Again!
Real Life
Feedback

This happens to Nigel when he's hit with a needle laced with Gabi's poisonous fluid, and Gabi drinks her own poison, until it is revealed that she is not venomous much to Gabi's delight as it means she can shower Nigel with affection.

This happens to Nigel when he's hit with a needle laced with Gabi's poisonous fluid, and Gabi drinks her own poison, until it is revealed that she is not venomous much to Gabi's delight as it means she can shower Nigel with affection.