Due to its nature as a sequel, any spoilers regarding Star Wars: The Clone Wars will be left unmarked. 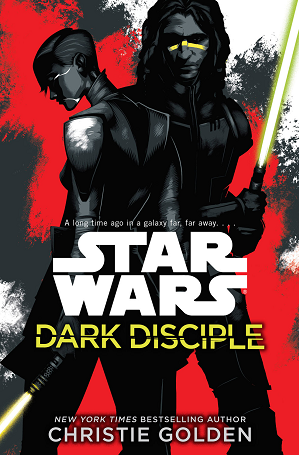 For years, the galaxy-wide conflict known as the Clone Wars has raged. The struggle between the rightful government of the Galactic Republic and the Confederacy of Independent Systems has claimed the lives of untold billions.

The Force-wielding Jedi, for millennia the guardians of peace in the galaxy, have been thwarted at nearly every turn by the Separatists and their leader, the Sith Lord Count Dooku.

With the war showing no signs of ending, and the casualties mounting each day, the Jedi must consider every possible means of defeating their cunning foe. Whether some means are too unthinkable—and some allies too untrustworthy—has yet to be revealed...

Dark Disciple is a Star Wars Expanded Universe novel by Christie Golden which focuses on an alliance between the failed-Sith-acolyte-turned-bounty-hunter Asajj Ventress and maverick Jedi Master Quinlan Vos, who has been ordered by the Jedi Council to assassinate Count Dooku in the hope that his death will bring a swift end to the Clone Wars. This radical act is prompted by the near-genocide of the Mahran at Dooku's order. During their mission, Ventress and Vos will have to struggle with their differing ideologies and growing feelings for one another as they seek a way to finish Dooku once and for all.

The plot of Dark Disciple is based on eight unproduced scripts written by Katie Lucas from The Clone Wars that were written but not animated before the show was canceled. The eight scripts were divided into two four-episode arcs that would have been part of seasons 7 and 8 of the show. The episode titles would have been "Lethal Alliance", "The Mission", "Conspirators", "Dark Disciple", "Saving Vos, Part I", "Saving Vos, Part II", "Traitor", and "The Path".