Due to its nature as a sequel, any spoilers regarding the first six seasons of Star Wars: The Clone Wars will be left unmarked. 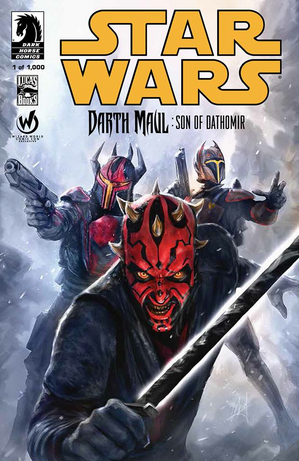 Darth Maul: Son of Dathomir is a four-issue limited comic book series based on an unused story arc in Star Wars: The Clone Wars due to the cancellation of the series. Originally released as separate issues, it was later reprinted as a full graphic novel. It revolves around the titular Dathomirian Zabrak, whose story arc was Left Hanging.

Following Darth Maul's coup on Mandalore and his failed attempt to form an alliance with Darth Sidious that ultimately resulted in the death of his brother Savage Opress, Darth Maul is now a prisoner of the Separatists. Sidious still apparently had plans for his former apprentice, leaving Darth Maul to be imprisoned within "The Spire" on the frigid planet of Stygeon Prime, interrogated by Sidious's new apprentice, Darth Tyrannus (Count Dooku). When the Count takes a reprieve in torturing Maul, two soldiers from the Mandalorian terrorist group Death Watch bust Darth Maul out of prison, giving the Sith Lord the perfect opportunity to go on a Roaring Rampage of Revenge...

While the revival season for The Clone Wars did not adapt this story, Maul's story later continued in Star Wars: Rebels in stories set over a decade after the conflict ended, with Maul's role at the end of the Clone Wars revealed through flashback sequences in the Star Wars: Ahsoka book. Those events were subsequently adapted and reconfigured with the seventh and final season of The Clone Wars, but not before Solo revealed what the character was up to in the long gap between the end of The Clone Wars and his return in Rebels.

Son of Dathomir also holds the distinction of being the last Star Wars title published by longtime publisher Dark Horse Comics before the publishing rights went back to Marvel Comics at end of 2014. In accordance with Disney's decision to reboot the Star Wars Expanded Universe, it was also the only Dark Horse story that had the distinction of being canonical — at least until Dark Horse regained the license to be the secondary publisher of Star Wars comics in 2021, publishing stories tied to the Disney-original Star Wars: The High Republic line and more.

Son Of Dathomir contains examples of: