As of the Disney buyout and subsequent continuity reset, these comics are no longer canon despite being published under The Clone Wars label.

open/close all folders
Advertisement:
Shipyards of Doom
Crash Course
The Wind Raiders of Taloraan
Slaves of the Republic
This comic was later adapted into the television show.
In Service of the Republic
Takes place before "The Holocron Heist".
Advertisement:
Hero of the Confederacy
The Clone Wars: Hero of the Confederacy was a monthly comic arc written by show writers Henry Gilroy and Steven Melching, and illustrated by Brian Koschak and Michael E. Wiggam.

The arc ran from November 2009 to January 2010, during the show's second season.

An excerpt titled "Opress Unleashed" was released for Free Comic Book Day in 2011. 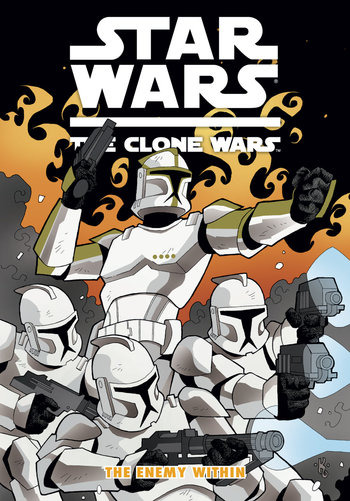 The newly deployed Sergeant 7719, or Banks, is sent to lead his first mission on Oznek.

Although the comic isn't published under the The Clone Wars multimedia project, it is considered a sequel of the then-unreleased The Sith Hunters and a prequel to the also then-unreleased "Revival"note Both would come out during the comic's run.

The Sith Hunters
Defenders of the Lost Temple 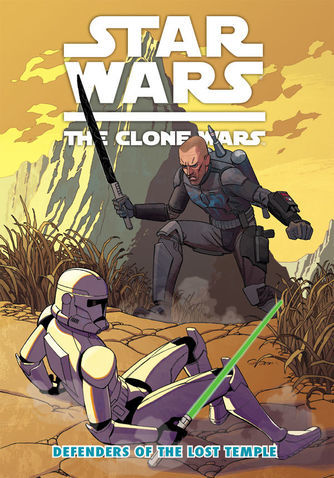 The Clone Wars: Defenders of the Lost Temple was written by Justin Aclin, who would later pen the following issue, The Smuggler's Code, and was illustrated by Ben Bates of Sonic the Hedgehog (Archie Comics) fame. The story takes place sometime after the events of "A Friend In Need" and before "Eminence".

On a mission to investigate an abandoned Jedi Temple for an ancient Sith artifact with Jedi General B'ink Utrila and Commander Rennax Omani, Clone Trooper Glitch contemplates his own worth as a copy of a great Mandalorian warrior. He has never been the best soldier, and as he learns about the Jedi and the power of the Force, he begins to feel that perhaps what has been setting him apart from the other clones is his own connection to the Force...

As the investigation progresses, the group discover truths not only about the temple, but about themselves. It all comes to a head when the Mandalorian Death Watch suddenly appears, wanting to take the artifact from the temple for themselves.

Tropes in this issue include: