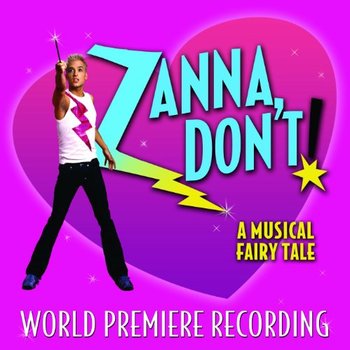 "I'm a one-woman woman
And you're wastin' my time."
—"I Ain't Got Time"
Advertisement:

Zanna, Don't! is an Off-Broadway musical by Tim Acito. It was written in 2002 and ran its Off-Broadway run 2003. It was to get a run on Broadway, but talk of that has largely tapered off. It takes place in an Alternate Universe where chess is cool, football is weird, and everybody is gay.

The show revolves around the character Zanna, resident matchmaker, magic practitioner and student at Heartsville High. In the course of the story, he hooks up Mike (Heartsville's star chess player) and Steve (a lonely quarterback who's the new kid in school), and Roberta (whose girlfriends all seem to "dump her the next day," her most recent girfriend being a girl named Carla) and Kate (an overachiever who dreams of getting a medical degree). The students decide to write and perform a controversial musical about a heterosexual couple in the army as a social critique of the Don't Ask, Don't Tell law, with Kate and Steve cast as the leads. One thing leads to another, and Steve and Kate realize that they aren't just acting. However, they agree that they could never be together, as Heartsville is notoriously heterophobic. Meanwhile, Zanna struggles with his feelings for Steve, thinking that Steve and Mike still love each other.

Disaster strikes when Steve and Kate kiss in celebration after Mike wins his chess tournament, causing them to be ostracized. They run to Zanna, the only one in town who hasn't shunned them yet. Zanna suggests that they show up to prom as a couple anyway, only for Candi to call him and say that mixed-sex couples aren't allowed at prom. Kate and Steve sadly try to leave town, only for Zanna to stop them and send them to prom anyway. He flips through his spellbook to find a way to help his friends, but the only spell that would be an option would cause Zanna to lose his powers for good. Proclaiming that "Nothing done out of love can ever do us harm," he takes up his wand. In an attempt to make everything better, Zanna casts one final spell that will turn the world completely upside down.