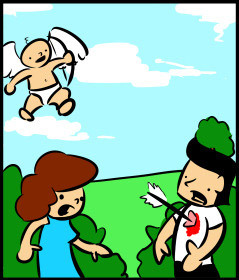 Cupid, the personification of Love at First Sight. Always looking for couples to shoot with his arrows to make them fall in love. Sometimes, he misfires and hits the wrong person. The results are sometimes Played for Laughs, sometimes not. Unsurprisingly, the day Cupid often does his "work" is Valentine's Day.