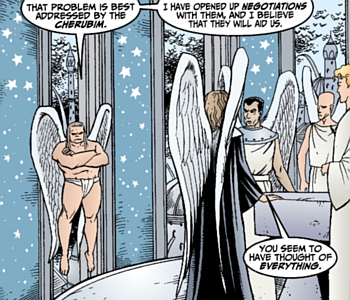 Well, except for talking to God, but it's only a Fallen Angel. What Could Possibly Go Wrong?
Advertisement:

The problem with God is that His given definition is one of omnipotence and benevolence. This can make it tricky to depict Heaven, especially if you want to add some grey in there, or make sure that The Legions of Hell are actually a threat. So we go down in cosmic denominators.

The Council of Angels plot gets around this by stating that Heaven is run by angels instead, with varying powers running between the Physical Gods and the Powers That Be; not counting the really young ones. Often it's explained that in the last two millennia, God decided to retire someplace sunny, or work on some secret project, letting humans and angels work things out themselves instead of directly controlling them. The angels tend to be somewhat upset about this. Or maybe there is no personal God at all, and the angels follow some more vague ideal of goodness, themselves at least supposedly representing its highest embodiment.

Oh, even with God around, don't expect them to clear up whether Judaism, Christianity or Islam is right; often they're not sure themselves, or may be be divided over which religion to support. If they do know, there seems to be an unspoken rule against telling anyone. It's also not uncommon for different angels to have different viewpoints on the nature of "good", often associated with human viewpoints.

They may even be a Celestial Bureaucracy.

In brighter settings, Fluffy Cloud Heaven is a diversion for newly arrived souls of humans. There's often a "Heaven of Heavens" where they go eventually; where presumably God really is. Hopefully this is where good beings who are "soul-killed" go as well. Nobody ever talks about what this is like, ever; and it's extremely rare for someone to come back from it.

In darker settings, God Is Evil and doesn't want to deal with the masses personally, and the angels either collaborate or are secretly rebelling. Or maybe God is good but non-interfering, but the angels took their free will the totally wrong direction, and became Knights Templar.

Hell might be run in a similar way, but it's perfectly possible that there's a Devil, but No God.

See also God Is Evil, Have You Seen My God?, Crystal Dragon Jesus, and their usual leaders, Celestial Paragons and Archangels. The opposite number of Demon Lords and Archdevils. The Armies of Heaven typically form these Councils' chambers militant.

open/close all folders
Anime and Manga
Card Games
Comic Books
Fan Works
Literature
Live Action TV
Tabletop Games
Theater
Video Games
Webcomics
Holy Bibble: There is a council of archangels who occasionally gather around a table to discuss things, though more often than not it seems that the angels on the council generally make secret decisions on their own, undermining the whole system all together.
Web Original