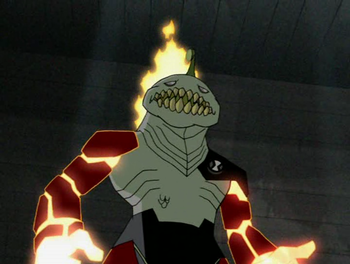 What do you get when you cross living fire with a fish?
Aya: By the way, you're also a living human, aren't you? Why do you work in the Netherworld?
Youmu: Me? I've never thought of that. But I'm a dead human, too, so... hmm.
— Bohemian Archive in Japanese Rednote Youmu is a "half-ghost"

Starfish Aliens and Eldritch Abominations are plenty strange, but an Oxymoronic Being's mere existence is self-contradictory, like a tall dwarf or a short giant or a kind Demon (in the Christian sense) or an Anthropomorphic Personification of nothing. To make one, take any two mutually exclusive characteristics; anything that somehow has both is an Oxymoronic Being.

For the record, no, "honest politician" doesn't count.

Compare and contrast the Paradox Person, whose existence actually defies the natural order. See also Hybrid Overkill Avoidance, which aims to stop this.