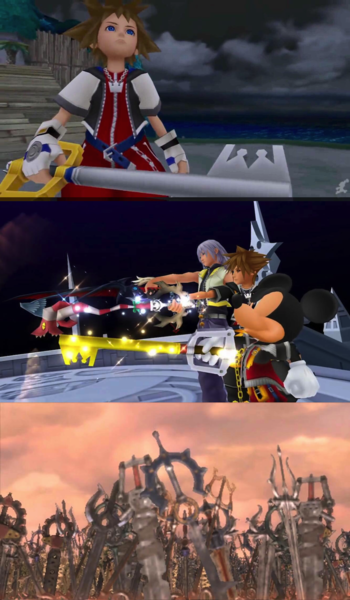 Kingdom Hearts: Only The Hero has a Keyblade, and it's a really big deal.
Kingdom Hearts II: The Hero and his True Companions all have Keyblades.
Kingdom Hearts: Birth by Sleep: The climax takes place in a literal graveyard of Keyblades.
"Pshh. Everyone's a Saiyan nowadays. What have I been missing? Heh! And they're all SUPER Saiyan, too! Some legend! Gah! Now I'm the weakest one! Me, a mid-level warrior! Well, screw that! If everyone can go super, I say it's not super at all!"
— Nappa, Dragon Ball FighterZ
Advertisement:

In many series, something or someone is first introduced as special — new, awe-inspiring, mysterious, utterly unique, unparalleled, or some combination of those things. Sometimes, either later in the series or in related works in shared universes, that specialness seems to fade without much explanation or get outright retconned away. The unique example becomes just one of many, the mystery somehow gets thoroughly documented, the new arrival turns out to have a long history in the area, the unparalleled turns out to be a footnote, and the awe becomes... meh.

Can be a form of Continuity Drift, perhaps sometimes due to careless research on Long-Runners. But Tropes Are Not Bad; it can also be justified if enough time passes and the once unique aspect is spread due to analysis/teaching/reverse engineering. Indeed, writers often do this on purpose. This trope may overlap with So Last Season. In a way, it adds fuel to the fandom who like making their own Sailor Earth.

Alternative Title(s): Everyone Has A Power Ring, Novelty Decay