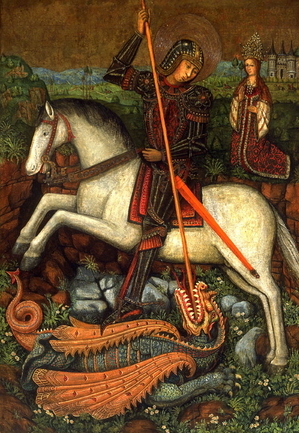 St. George and the Dragon by Girard Master
"Well personally... I kinda want to slay the dragon."
— Angel, Angel, "Not Fade Away"
Advertisement:

In modern fantasy fiction, killing a dragon is usually a job for an entire party of adventurers, or completely beyond most warriors' ability to harm. So how can the Dragonslayer do this themselves? Having a dragon-specific Weapon of X-Slaying and the strength to lift and wield it helps, but beyond incredible strength and skill, they must have knowledge. Dragons traditionally have a brace of classic weak spots — a missing scale, the eyes, and the mouth are particularly common — and knowing just where to hit the beast can be crucial. Dragons, especially in games, often have specific elemental alignments, and knowing how to properly exploit the Elemental Rock–Paper–Scissors can also go a long way.

So this is just a variant of the Hunter of Monsters, right? Well, no. The Hunter normally suffers the Achilles' Heel of Crippling Overspecialization, while the Dragonslayer still has a giant sword, which unlike a stake or silver daggers is very effective in battle. The Dragonslayer is often The Hero with a few dead dragons tacked on.

But that's assuming the truth. Dragon slayers have a reputation for being Miles Gloriosus, to the point where even the real deal is viewed with skepticism. Perhaps the one rumored to be a dragon slayer isn't, and you instead need to look for his brother, or maybe sister. Or maybe their great-grandfather was one, but nobody in the family knows how to do it anymore.

Due to the power and danger usually given to dragons in myth and fiction, the title of Dragonslayer itself can also be a highly respected and coveted one in-universe, as bearing it signifies personal victory over one of the most powerful and feared monsters around.

In medieval legends, this role is often filled by heroic knights. Though in non-Abrahamic legends the role may be filled by a storm god instead.

It is important to note that having killed one dragon does not necessarily make one a dragonslayer, just as having saved one person makes someone a hero but not The Hero. This is basically part of their job description, meaning they generally hunt dragons, plural. The other qualification, of course, is surviving the encounter. Not the person who gets rid of The Dragon, unless we're being literal here. Compare and contrast the Dragon Tamer, who works with dragons instead, though there's nothing stopping someone from being both.