Our Gryphons Are Different 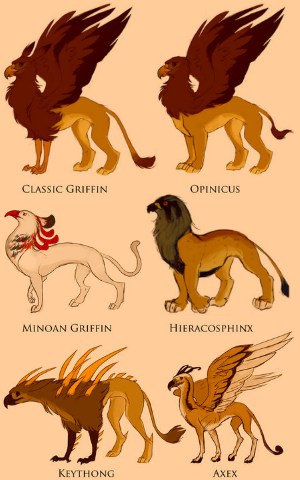 Our Monsters Are Different, dealing with bird/mammal hybrids.

While not as popular as dragons or unicorns, gryphons, also known as griffins or griffons, with alces and keythongs being archaic alternatives, are still prominent beasts in modern fantasy.

The oldest gryphon myths come from the Egyptian Mythology and ancient Sumer. Later, they were picked up by Classical Mythology, and afterward used in Heraldry. They became a symbol of Christianity thanks to being a mixture of two majestic creatures that Christians back then saw as the "kings" of animals, thus making them rulers of both the earth and the heavens. After that, they went into literature, but their popularity would be low until the 1990s.

In modern media, gryphons are often wild, powerful predators but are also found as guardians, mostly of treasures, or as winged steeds. When not simple beasts, they're usually noble beings; they sometimes retain their medieval connection with explicitly divine forces, but this isn't very common. They're usually animal-level beings, but a few portrayals depict them as intelligent and capable of speech. If you are really prone to do some research you can see that their love for gold, their negative attitude towards horses (sometimes expanded to other real and fantastic equine beings), and their old conflict with vaguely cyclopean races are in fact drawn from myth, but don't expect them to be very prominent.

All in all, gryphons tend to have four main body plans:

In addition to these, variety is sometimes introduced to griffons by means of varying what creatures their designs combine: while the traditional griffons are part eagle and part lion (or part horse, in the hippogriffs' case), fiction sometimes varies this by using different cats and birds of prey, resulting in griffons that are part hawk, part owl, part vulture, part tiger, part leopard and so on. This may be either a purely aesthetic distinction or may impact the griffons' habitat and abilities (such as a peregrine falcon-and-cheetah griffon being very fast, a vulture-hyena griffon being a scavenger, or a snowy owl-and-snow leopard griffon living in cold climates). Raptorial birds are the most common kinds used, but almost all sorts of bird, such as ravens or parrots, are used on occasion. It's very rare for the mammalian parts to be anything other than a feline or an equine, however.

May overlap with Giant Flyer should the gryphon have wings. The wingless kind never flies, being seemingly not as magical as eastern dragons.

Not to be confused with Call a Pegasus a "Hippogriff", where one type of mythical creature is given the name of another mythical creature, and Hold Your Hippogriffs, where commonplace sayings are modified to include references to fantastic fiction worlds.

See also Our Sphinxes Are Different and Our Manticores Are Spinier for more sometimes-winged leonine creatures with non-leonine heads from Mediterranean mythology. See also Our Perytons Are Different, for another bird/mammal hybrid, though its mythical pedigree is a bit less genuine.