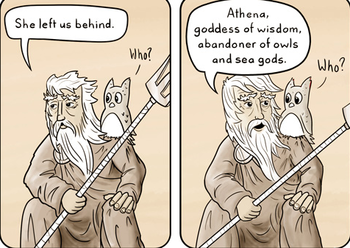 Animals, for the most part, don't typically talk. Despite this, one of the animals that comes closest to participating in a coherent conversation (not counting parrots) is the owl, its call of "hoo" being often mistaken for the owl asking "Who?" in English.

A subtrope of Who's on First?. Compare Animal Species Accent and Pokémon Speak.