Fanfic / Getting Back on Your Hooves 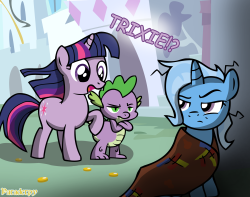 Trixie doesn't look so great and powerful anymore, does she?
"Twilight finds Trixie homeless on the streets in Canterlot. Can Twilight help her get back on her hooves? And will Trixie even LET her?"
Advertisement:

Getting Back On Your Hooves is a My Little Pony: Friendship Is Magic fanfiction by Kendell2 and Shadow Raikou with cover art by Paraderpy, available on DeviantArt here

During a trip to Canterlot, Twilight Sparkle and Spike encounter a familiar face: Trixie, who is now an unkempt, miserable hobo. Feeling somewhat responsible for Trixie's condition, Twilight sets out to help the fallen entertainer her get back on her hooves, starting by letting her live in the library. But will the haughty, prideful Trixie even let her? How will Twilight's friends handle Trixie's presence in Ponyville? And what does Checker Monarch, a cold and quietly terrifying unicorn mare, have to do with it?

Kendell2 also made a side story set in the same universe called Perfect Companions which deals with how the Mane Cast got their pets.

This was followed with a sequel Magic Duel

, focusing on this universe's version of the episode Magic Duel, the tropes for which (as well as one shots) can be found below. A live reading can be found on

Another sequel was also made called Tarnished Diamonds, focusing on Diamond Tiara after the events of the fic. It has its own page.

The story is presently complete, though the writers have shown interest in writing more stories in the same universe. This includes a one shot titled "Happy

" and its Optional Canon companion piece Another Happy Mother's Day

(by Alexwarlorn) (Warning! Contain spoilers for for the main fic and Perfect Companions in both the story and the trope listing below) and Word of God is they intend to write more one shots. A live reading of the Mother's Day stories can be found here

Recursive Fanfiction is in progress, revolving around Helping Hoof and his father Iron Hoof dealing with the fall out of the main fic.

, and Here at Crunchy Monkey Studios

. The first is up to chapter 4, the second to half of chapter 10, and the third is complete. A live reading of the final chapter can be found here

Was featured in episode 16 of KPNYRadio. And was reviewed

by Tommy Oliver (AKA Bronycurious).