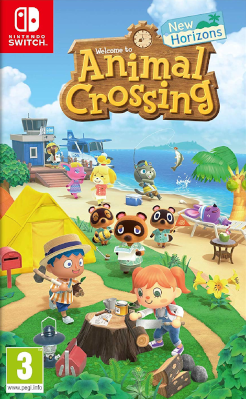 "Thank you for choosing the Nook Inc. Deserted Island Getaway Package. This is one trip that we here at Nook Inc. can recommend with confidence. Your destination is a peaceful island, where it's the little things that count..."
—Nook Inc.

Animal Crossing: New Horizons (Atsumare Dōbutsu no Mori) is the fifth installment of Nintendo's Animal Crossing series, released on March 20, 2020. After skipping over the Wii U (owing to a combination of the system's commercial failure and the fact that the dev team had been busy working on Splatoon), this installment, released on Nintendo Switch, returns the series to home consoles.

A far cry from the rural life sim angle of previous installments, this game takes place on a deserted island, where villagers explore and gather resources to build tools and furniture, and eventually develop their own little community.