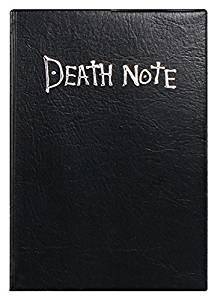 The human whose name is written in this note shall die.
Advertisement:

The Deadly Book is a book that is capable of inflicting harm on whoever reads it, which can even result in said reader being killed. However, the book may even inflict harm on others as well.

This can be due to many causes, such as the book being cursed to harm anyone who reads it, or else the book is sentient and really doesn't like being read by anyone.

This may also occur if the book is written in by someone.

This may overlap with Animate Inanimate Object if the book in question happens to be an animate object, and also with Brown Note if the information contained in a book kills the reader directly.

Compare Tome of Eldritch Lore, which is when a book contains dark prophecies or spells, but is otherwise not actively harmful to its reader. Also compare Books That Bite, when the books are dangerous Animate Inanimate Objects, and Throw the Book at Them, which is when books are being used as physical weapons.