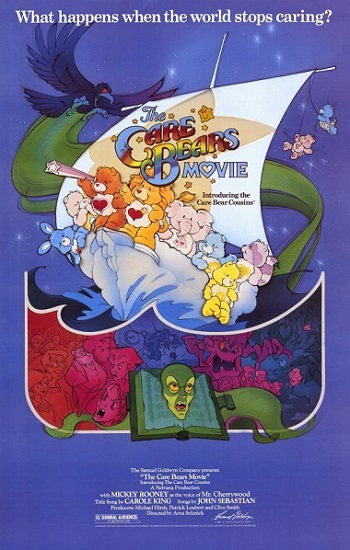 The story is presented via the Framing Device of a man telling the children in his orphanage the tale of three lonely orphans: the siblings Kim and Jason, who are helped by the Care Bears, and an older boy named Nicholas, who is tempted by an evil, sentient book.

The book gives Nicholas magical powers, and then convinces him to turn everyone he sees into hateful people. This damages Care-a-lot, causing earthquakes and threatening to destroy it all. Kim, Jason, and the Care Bears have to go and stop what's happening. Their quest gets sidetracked when they are forced to go to another land, which turns out to be the home of the Care Bear Cousins.

This is significantly the darkest of the film trilogy, featuring a spell book with a haunting green face that seems to be prefer the world in heavily implied global anarchy rather than just plain Jerkassry towards one's fellow man, eerie rides, and a crazed eyed possessed sorcerer wannabe. Even the soundtrack can be threatening at times.

This film was a modest success, becoming the highest-grossing non-Disney animated film at the time (only to be beaten by An American Tail a year later). It was also immensely profitable for American Greetings, and led to two more Care Bears sequels and a TV series.

The Care Bears Movie provides examples of the following tropes:

A variation; the main theme song for the Care Bear Cousins includes a roll call for Loyal Heart, Proud Heart (who is at one point miscoloured blue), Gentle Heart, and Treat Heart.

A variation; the main theme song for the Care Bear Cousins includes a roll call for Loyal Heart, Proud Heart (who is at one point miscoloured blue), Gentle Heart, and Treat Heart.