Literature / The Name of the Rose 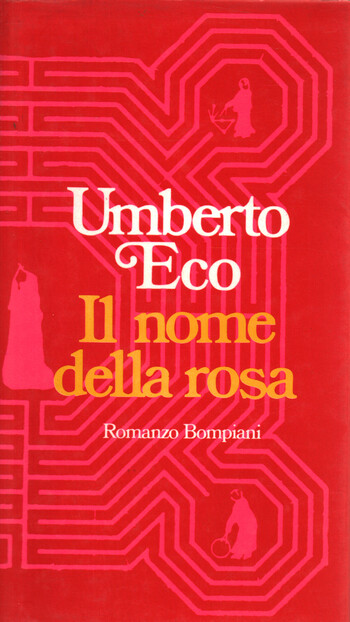 The Name of the Rose (Il nome della rosa) is a novel written by Umberto Eco in 1980.

Set in what has been called the disastrous fourteenth century, during the period of the Medieval Inquisition. The story, described by some as Sherlock Holmes IN THE 14th CENTURY, follows Brother William of Baskerville and his young apprentice, novice Adso of Melk, who go to an abbey where a murder was committed and end up investigating it.

It received a movie adaptation in 1986, directed by Jean-Jacques Annaud, and starring Christian Slater, F. Murray Abraham, Ron Perlman, Michael Lonsdale, and Sean Connery. It was also adapted a year later into an unlicensed video game

. In 2019 it was adapted by Italian State Broadcaster Rai 1 into a TV miniseries, and broadcast on Sundance TV in the United States. It starred John Turturro, Rupert Everett, Michael Emerson, James Cosmo, Sebastian Koch and Tchéky Karyo.