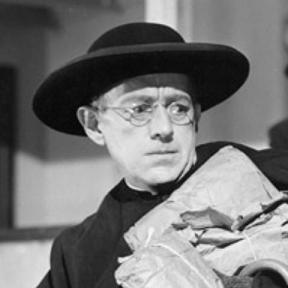 "The little priest was so much the essence of those Eastern flats; he had a face as round and dull as a Norfolk dumpling; he had eyes as empty as the North Sea; he had several brown paper parcels, which he was quite incapable of collecting."
Advertisement:

Father Brown is a detective series created by G. K. Chesterton. The protagonist is actually called Father J. Brown, though we are never told what the initial stands for, and is originally presented as the Roman Catholic parish priest of Cobhole in Essex, though he is found in parishes as far afield as Italy and South America. In appearance he is undistinguished, small and dumpy, short-sighted and doesn't look particularly intelligent; dressed in shabby clerical black, and carrying an umbrella as dumpy and shabby as himself.

The Father Brown mysteries generally appeared first as independent short stories in various magazines; (most of) the stories were eventually collected in a series of five books:

Three stories, "The Donnington Affair" (1914) (GKC writing the solution of a mystery set up by Max Pemberton), "The Vampire of the Village" (1936), and "The Mask of Midas" (1936), were published separately, though the second of these was later included in editions of Scandal.

In 1934 a film version of Chesterton's priest based on "The Blue Cross"' appeared with the title Father Brown, Detective, with Walter Connelly in the title rôle. In 1954 Father Brown

("He Can't Stop Doing It") (1962). (The score to these, by Martin Böttcher, became very popular in Germany.) In 1970 an Italian television series entitled I racconti di padre Brown

TV series, each episode adapted from one of Chesterton's short stories. In 1979, the TV move Sanctuary of Fear featured an American Father Brown (Barnard Hughes) sleuthing in contemporary New York City.. but the protagonist's only resemblances to Chesterton's character are his name and occupation. A German television series, Pfarrer Braun

("Pastor Brown"), loosely based on the Chesterton character, is in production since 2003; its title theme by Martin Böttcher is a Shout-Out to the one of the Heinz Rühmann films. A 2013 TV series

produced by the BBC cast Mark Williams of The Fast Show and Harry Potter fame in the title role. The trope page for that show can be found here.

Tropes featured in this series include: (Note that the following examples are heavy on spoilers!)