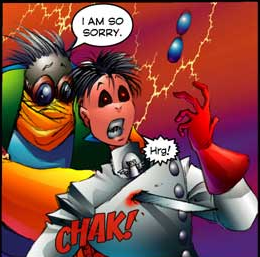 Seraph: I can take you to [the Oracle]. But first, I must apologize.
Neo: Apologize for what?
Seraph: For this. [attacks Neo]
— The Matrix Reloaded
Advertisement:

One of the Stock Phrases. Character A apologizes in some way. Character B is confused, as A hasn't done anything worth apologizing for, and usually asks "For what?" or just gives a rousing "Huh?" Then Character A does whatever it is he was apologizing for - usually attacking the other character and knocking them out. Sometimes this precedes a Heroic Sacrifice, but not always.