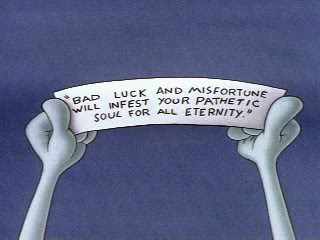 "Maybe it's a misprint."
Advertisement:

In real life, a fortune cookie contains a strip of paper that provides the reader with a piece of advice. In fictional works, a character can receive a fortune cookie which doesn't include a fortune but the opposite of it, such as a demotivational phrase, a foreshadowing of things to come, or something similarly grim. Often the plot of an episode is set in motion by these cursed messages, though they can also be used in the middle of the episode as a gag.