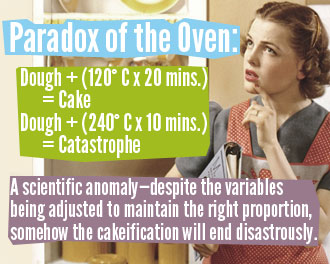 "Relax, Candace. It's simple math. Instead of cooking it at 350 degrees for one hour, we could cook it for 5 minutes at... (enters equation into calculator) 9,000 degrees! What could go wrong?"
— Stacy Hiranonote The surface of the Sun is 9,900 degrees Fahrenheit, by the way., Phineas and Ferb, "Moon Farm"
Advertisement:

Whenever someone is strapped for time and needs to cook something, they will assume that the time and temperature listed in the recipe are inversely proportional; logic a Straw Vulcan would be proud of.

For example, they'll assume a cake that needs 30 minutes at 200° Celsius (or 392° Fahrenheit) to bake can be baked just as well in 15 minutes at 400° Celsius (or 752° Fahrenheit), never mind that a normal kitchen oven won't go that high. Expect there to be flames, plenty of smoke, and for the Lethal Chef to pull out something resembling a forest fire from the oven. Or occasionally, a fireball that destroys the entire house, with a perfectly baked pie in the middle of the debris.

Various examples show the oven dial go up to thousands of degrees. One has to wonder why the oven had a dial that could go up that high if it wasn't meant to be used that way.

A subset of the horrible cooking skills of a Lethal Chef. This has probably been Truth in Television for some of us at one point in our lives. Also, notice that some processes do behave according to Oven Logic; milk pasteurization, for example, can be done in 5 minutes at 70°C, or in less than 3 seconds at 150°C — though again, the reduction in time is disproportionate to the increase in temperature (and doing it faster changes the taste by caramelizing the milk sugar).

The biggest mistake most people make is believing that degrees is proportional to temperature, ie going from 100 to 200 degrees results in twice as much heat. This is not true because neither 0 degrees Celsius nor Fahrenheit indicates zero energy, or absolute zero. To find out how much you have to increase temperature by to actually get double thermal energy, you need to use Kelvin or Rankine.

That said, the rules in cooking (and chemistry) are still a bit more complicated than heat x time, which the character is not privy to — there are several factors to the equation that the "cook" in question fails to consider. The rate of heat transfer is not proportional to the temperature of the oven, but to the difference between the temperatures of the oven and the food. Since the temperature of the food changes over time, you'd need to have a firm grasp of differential equations to be able to predict the time required at higher temperatures... or enough experience to cook "by feel", of course.note Broadly speaking, the time and temperature factors have to be such that enough heat will reach the interior of the food to get it to a cooked state when the outside of the food is nicely browned. Too high a temperature and the inside will still be raw when the outside is done; too low, and the inside will be overcooked and/or dried out when the outside is done.

That's not even counting the effect on chemical kinetics, which will greatly increase the rate of reactions such as oxidation (burning) at high temperatures. (The general rule of thumb is that every 10°C increase around room temperature roughly doubles the rate.)

This trope is also a type of Logical Fallacy. Not (directly) related to Fridge Logic. The more extreme cases will require our chef to use Tim Taylor Technology. See also Mismeasurement. Contrast Instant Roast.