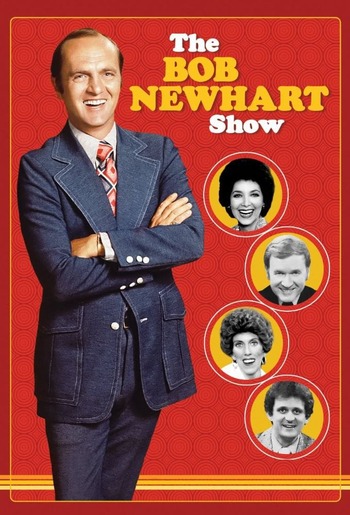 A Sitcom that aired on CBS from 1972–78 and the forerunner to two of Bob Newhart's other sitcoms, Newhart and B.o.B. It was a top-rated success at the time, and has quietly earned classic status since.
Advertisement:

Produced by David Davis and Lorenzo Music as a deliberate complement to The Mary Tyler Moore Show (an established hit produced by the same studio, MTM Enteprises, and immediately preceding it in CBS' Saturday-night lineup), this series shared much the same format: drop a bunch of wacky character actors into a professional setting and hire an established star as their Straight Man.

At the time Newhart was one of comedy's hottest stars, renowned for his dryly understated standup persona. Who better to field the role of an uptight shrink than the guy whose biggest hit album was The Button-Down Mind?

The premise revolves around well-respected Chicago psychologist Dr. Bob Hartley (Newhart) and his strong, sexy schoolteacher wife Emily (Suzanne Pleshette) — as one critic put it, a marriage of two people who're convinced the rest of the world is crazy, and have agreed to keep an eye on one another. It's a wise precaution: Surrounded by neurotics, depressives and other mentally unstable people both in private life and at his psychology practice, Bob has plenty of opportunity to underreact.

To further the cause, Newhart's trademark telephone routine, in which he valiantly holds down one end of an increasingly surreal conversation, is worked into virtually every episode. As is the standard closing scene, featuring Bob and Emily in bed, talking over the events of that episode and more often than not dueling for the last word.

A distinctively veteran supporting cast — including Pleshette, Bill Daily (as Howard, the friendly but somewhat addle-headed airline navigator who lived next door to the Hartleys and had a tendency to drop in on them at odd hours), Peter Bonerz (as Jerry, the swinging-single orthodontist from the clinic office next door), Marcia Wallace (as Carol, the hyper-competent secretary they share), and Jack Riley (as Bob's uber-patient Elliott Carlin) — serve as fine foils. Carol even made it onto an episode of Murphy Brown years later, as one of Murphy's few plausible secretaries-of-the-week, who leaves when Bob comes back to beg her to return to the Chicago office ("Jerry has made a mess of his appointments!").

Not surprisingly Newhart referenced it most frequently, and memorably; in an episode where Dick and his wife go to a counselor, they meet the doctor's previous patient, Jack Riley as Mr. Carlin (the doctor says that he's got a lot of work ahead of him there, "due to some quack in Chicago"). And in Newhart's final episode, one of the most famous in TV history, the entire series is revealed to be a dream of Bob Hartley's — from which he awakens in his original bedroom set, next to Emily.

This was actually the second show Newhart did that was called The Bob Newhart Show. The first was a Variety Show that aired for one season from October 1961 to June 1962.