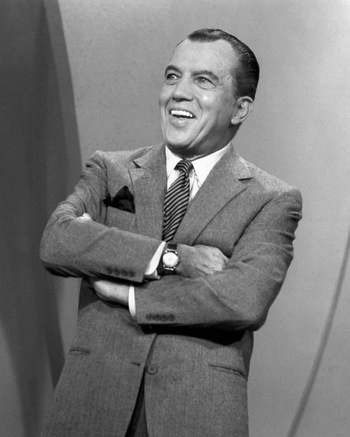 "Ladies and gentlemen, we have a really big shew for you tonight!"
Advertisement:

A television Variety Show, hosted by New York Daily News theater columnist Ed Sullivan, that was required Sunday-night viewing in American homes for more than two decades. It aired on CBS as Toast of the Town from June 1948 to September 1955, and then as The Ed Sullivan Show until June 1971, when it fell victim to The Rural Purge.

It is best remembered for the numerous rock music acts it featured, particularly Elvis Presley and The Beatles, as well as its comedy and novelty acts such as Wayne and Shuster. And it played a key role in the early history of The Muppets, as one of the several shows that featured Jim Henson's creations.

"We've got some really big tropes":