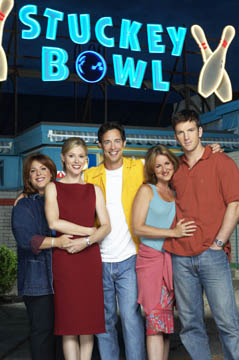 "This is a whole new brand of weird."
—Ed, to Phil
Advertisement:

A seriocomic show airing on NBC from 2000–04 about a hotshot New York attorney named Ed Stevens (Tom Cavanagh) who, following being fired from his law firm and a painful divorce, moves back to his little home town of Stuckeyville, Ohio, buys the local bowling alley, and runs it in conjunction with his law firm.

Basically Northern Exposure without the Fish out of Water elements, this show went for a sense of eccentric whimsy, which was usually genuine and smile-inducing ("Hey! You like sex? Come to the Festival of Ducks!").

Had an odd first episode - the entirety of the pilot was presented as a "Previously On..." intro and they started with episode 2.