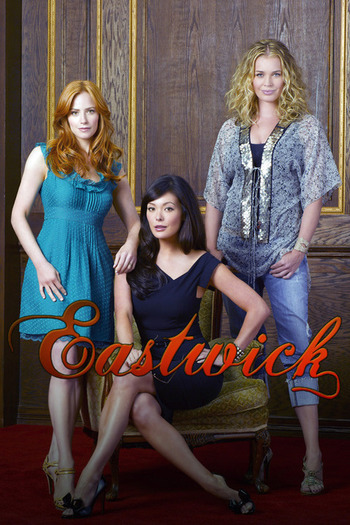 Eastwick was a Dramedy premiering on ABC for their 2009 fall line-up. The show is inspired both by the John Updike novel, The Witches of Eastwick, and the previous film version of the same name.

Roxie, Joanna, and Kat are all residents of Eastwick, but have never really interacted. Roxie lost her husband and now has a reputation of a man-eater, mostly because she is seeing a younger man. Joanna is a wannabe Lois Lane, a budding journalist with a hopeless crush on her co-worker, Will. Rounding out the group, Kat is a mother and a wife in a nearly-loveless marriage to her high school sweetheart. The three are drawn together during a harvest festival, when they all make a wish at the local fountain.

Afterward, strange things beginning happening in Eastwick. A mysterious millionare, Darryl Van Horne, arrives in a cloud of scandal and begins buying up the town. And the three women, soon becoming fast friends, discover they each possess powerful new gifts. Roxie is able to see the future, Joanna can hypnotize men with a look, and Kat has power over the elements.

The show has been compared to both Desperate Housewives and Sex and the City with magic. The series was canceled due to poor ratings, leaving several episodes unaired on the network (although in Britain the entire series was run by the Hallmark Channel... and again when they became the Universal Channel).

Example of:
Bigger Is Better in Bed