Series / The Edge of Night 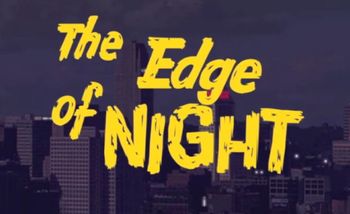 Long-running Soap Opera, running on CBS from 1956-1975, and on ABC from 1975 to 1984. Produced by Procter & Gamble Productions, it was the second half-hour long soap opera (premiering the same day as As the World Turns). Often referred to as Edge or EON for brevity.

Unique in that, unlike most other soaps that focused on domestic drama, Edge focused on crime and mystery elements; according to The Other Wiki, Edge was P&Gs attempt to salvage a planned daytime adaptation of Perry Mason. Its focus on crime/mystery and its late timeslot (originally scheduled at 4:30pm - hence the title) allowed it to amass a large male audience.