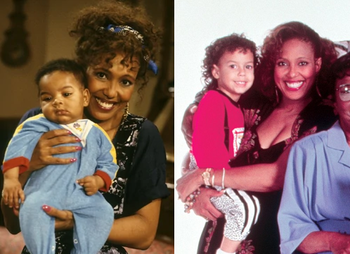 What a difference one season makes.
Gunn: Couple of weeks ago [Connor] was wearing diapers. Now he's a teenager?
Cordelia: Tell me we don't live in a soap opera.
— Angel, "A New World"
Advertisement:

Soap Opera Rapid Aging Syndrome (SORAS)—a term coined by Soap Opera Weekly founder Mimi Torchin around 1990, but a phenomenon already well-established in the genre by that point—is the device in which young characters mysteriously vanish from a series, but a short while later return much older than they should be based on the show's previous timeline. There are many reasons for this: perhaps a younger character proved to be a Cousin Oliver who simply didn't didn't fit on the show, but there's also all those pesky child labor laws

aimed at protecting children in show business, and the public and private agencies

that investigate abuses, which make having a child in the cast a bit of a hassle, and the trouble of finding a child actor who can properly remember lines and not blow takes. An important side benefit, though, is that a child who's suddenly turned into a teen is now old enough to get entangled in romance storylines.

In daytime soaps, where pregnancies and Switched at Birth drama are staples, the resulting baby really isn't needed once the plot has been resolved, so they're rarely seen in their toddler or childhood years. But with a new character in the ensemble, after a few years the usual practice is to age them way up so they can have more mature events occur in their lives.

On sitcoms, the change isn't quite as drastic but it's still present. Babies are cute and give adult characters opportunities to show their nurturing and/or silly sides, but toddlers are of little use in comedy until they're old enough to be smart-mouths on their own. Thus, sitcom kids generally turn four or five within two years of their birth.

There's also the fact that toddlers are notoriously difficult to work with as actors. They're old enough to assert themselves, but too young to understand the concept of acting, meaning they'll basically just do whatever comes naturally to them. A four-year-old, on the other hand, can be expected to remember simple lines and stage direction.

Different from Plot-Relevant Age-Up in that the latter is at least explained via magic/Applied Phlebotinum/Bizarre Alien Biology, or the transformation is actually shown on-screen. Do not confuse the two when adding examples.

Stephen King referred to this as the "Kid Trick" in Danse Macabre, his text on American horror media in the 20th century.

Generally abbreviated as SORAS in certain television communities. Not to be confused with multiple people named Sora, nor with liberal billionaire George Soros.

Compare Not Allowed to Grow Old, where the children do age as normally, but the parents seem to stop aging in the interim.

In extreme cases this may result in Absurdly Youthful Mother. Often overlaps with The Other Darrin.

Contrast with Not Allowed to Grow Up and Comic-Book Time.