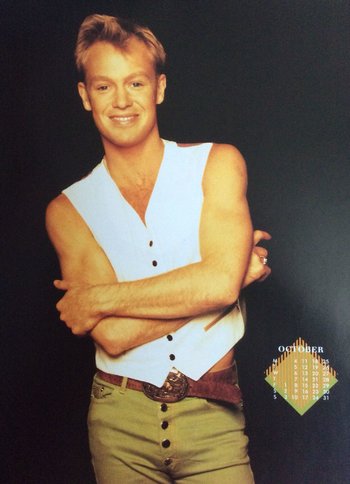 Jason Donovan (born: 1 June 1968 in Malvern, Australia) is an Australian actor and singer. He was first known for starring as the character Scott Robinson in the Australian soap TV series Neighbours, alongside with his co-star/ex-girlfriend Kylie Minogue, whom would later record a duet toghether called "Especially for You". Later on, Jason Donovan became a huge pop star when he was signed in to work with the English production group Stock Aitken Waterman, having four #1 hits and a decent amount of singles that made it to the top ten in the United Kingdom. He ended up becoming very popular, and "Jasonmania" swept through as girls went crazy for him.

Three albums later, he ended his deal with PWL Records and signed a deal with Polydor to release his fourth album, "All Around the World". Unfortunately, the album didn't receive too well, and he ended up falling into obscurity and he took a long hiatus from making music until the late 2000's-early 2010's, where he made three more albums, "Let it be Me" (2007), "Soundtrack of the 80's" (2010), and "Sign of Your Love" (2012).

Unfortunately, apart from his success, his life was also unlucky and he was troubled, so we would easily feel bad for him. His parents were divorced when he was a child, he sued a magazine for lying about his sexuality, causing almost all of his fanbase to turn their backs at him and then he went on a cocaine binge for a decent amount of years, which caused him to fall unconscious at some points. Later on, he met a girl backstage during a play and fell in love with her, but it wasn't until the year 2000, the year his first child was born, when he stopped his drug binge entirely and has stayed clean ever since.

Three of Jason's immediate family have also gone on to appear on Neighbours: his father Terence Donovan played Doug Willis (1990-1994, with occasional guest appearances between 2005 and 2016), his half-sister Stephanie McIntosh played Sky Mangel (2003-2007, with guest appearances in 2015 and 2020), and his aforementioned daughter Jemma Donovan has played Harlow Robinson since 2019. Somewhat amusingly, Harlow is Scott's great-niece, an indirect result of Soap Opera Rapid Aging Syndrome on her father/his nephew Robert.

Acting Credits note  Not all of his acting credits are listed