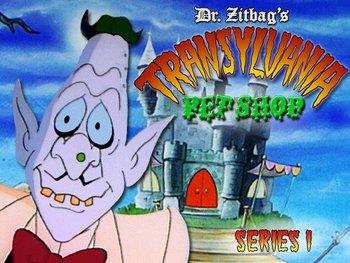 Created by Tony Barnes and airing in the UK, Spain and France (where it was known as Dr Globule) from 1994 to 1998, this revolved around an undead Mad Scientist living in Transylvania called Dr Zitbag, who, after getting fired from a pet shop for low sales, opened up his own in a Haunted Castle, where he is aided by skeletal talking dog Horrifido. The series followed him as he concocted money-making schemes, tried to avoid the long arm of malicious policeman Officer Deadbeat and attempted to impress the attractive vampiric Exorsisters.