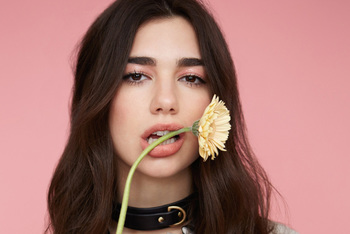 Guaranteed I can blow your mind
If you want to run away with me
I know a galaxy and I could take you for a ride
I had a premonition that we fell into a rhythm
Where the music don't stop for life
Glitter in the sky, glitter in my eyes
Shining just the way I like
If you're feeling like you need a little bit of company
You met me at the perfect time
Advertisement:

Dua Lipa (born 22 August 1995) is an English pop singer, songwriter, and model. Born to Albanian parents (her mother is half-Bosniak) from Kosovo, the family moved back to Kosovo when she was 10 after her father found a job there. A few years later, Dua moved back to London alone to become a singer and model. She's currently signed with the UK subsidiary of Warner (Bros.) Records. Her first single "New Love" was released in October 2015.

Her self-titled debut album was released in June 2017, featuring the hit single "New Rules", which became her second #1 song in the United Kingdom (after being part of a charity cover of Simon & Garfunkel's "Bridge Over Troubled Water" for victims of the Grenfell Tower fire), as well as her first top ten single in the United States. The album itself was placed in the top 20 of three websites' "Best Albums of 2017" list, even being named the 9th best of the year by Rolling Stone. Her sophomore album, Future Nostalgia was released in March 2020 to much critical acclaim.

I got new tropes, I count 'em:

I got you, moonlight, you're my starlight
I need you all night, come on, dance with me
I'm levitating
Feedback

Dua Lipa lays out the rules for breaking up.

Example of:
The Commandments

Dua Lipa lays out the rules for breaking up.