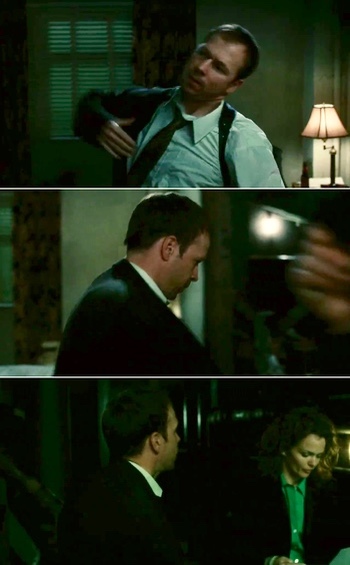 He came straight over.

Basically, this trope is where the scene transitions between, or characters/objects move between, two or more completely different locations in a seamless, fluid, or even surreal manner, as if the two locations are inexplicably connected. Like a visual Truck Driver's Gear Change, if you will.

This can either be used as a Scene Transition, or as a serious Mind Screw, especially if the characters themselves are aware of this jump.

For obvious reasons, any literary examples will be rather limited, but not entirely impossible.

If they really are part of the same location, or the location transforms into another, or the location is in a dream or hallucination, it's an Eldritch Location. If the transition is seamless for the characters, but not for the viewer, then it's just Teleportation. If the two locations are consistently bridged by some phenomena, then this trope does not apply, unless the transition is made in a single shot, or in a particularly fluid or surreal manner. If they are just Separated by the Wall, this doesn't apply, unless the rooms are not neighboring each other. If this trope is the whole point of something, then it's probably a Conveyor Belt Video.

Compare Match Cut, which this trope can be a more dynamic variant of. Compare Whip Pan, which can be used to disguise a cut to achieve this trope. Compare Gilligan Cut, which can sometimes use this trope Played for Laughs. Can also be used as a more creative Flashback Echo, or as a transition into/out of dreams or Hallucinations, provided they both take place in different environments.

While it can be used as a form of Sequencing Deception, Seamless Scenery is usually, by nature, very noticeable.

Please note; this trope does not apply when multiple Real Life locations are actually presented as one location In-Universe, no matter how obvious it is to the viewer that they are not.