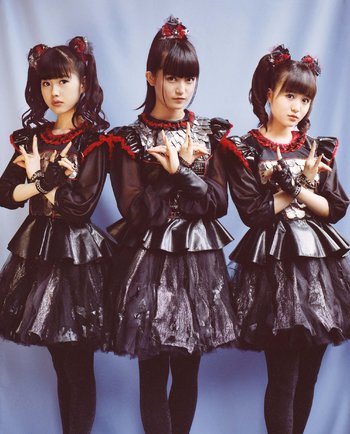 Originally a subunit of Junior-Idol group Sakura Gakuin, Babymetal note also stylized as BABYMETAL or BabyMetal. was formed by the members of the Heavy Music Club (Juonbu)* A reference to the keionbu or keiongakubu (Light Music Club) common in real Japanese schools, also depicted in media such as K-On! of Sakura Gakuin under the concept of a fusion of heavy metal and Idol music, now known as "kawaii metal". They are known for their energetic live shows which feature intricate yet fun choreography mixed with soaring vocals from lead singer Suzuka "Su-Metal" Nakamoto, backed up by a quartet of some of Japan's top metal musicians. Officially, they claim belief in "The Fox God" who brought them to metal and uses them as conduits to spread its message of "love and joy through metal" across the world. Instead of the standard devil horns, they use a modified "kitsune" sign (seen in the photo at right).

In reality, Key Kobayashi (known as KobaMetal), a producer at the Amuse talent agency and a longtime metalhead with connections in Tokyo's underground metal scene, discovered Suzuka during her time as one of the Karen Girl's. Realizing her potential, he decided to form a group around her once Sakura Gakuin began in 2010, figuring her unusually powerful voice would be a good fit for metal. Yui and Moa were chosen as backup due to their unique chemistry – the same reason they were often featured together during Sakura Gakuin – and also their smallness, as Koba liked the idea of Su being flanked by two tiny girls.*  Koba lucked out there as Yui and Moa both turned out to be very late-bloomers, ended their growth periods close in height (Yui is ~2cm taller), and are still shorter than Su – albeit by an inch or less in Yui's case. Su's trademark high ponytail and use of 1" heels during performances make her appear taller than she actually is (160cm/5'3"). At the time, none of the trio knew what Heavy Metal was. They would quickly learn.

During the three years Babymetal existed as part of Sakura Gakuin, they released singles apart from the main group, as well as music videos on Youtube. Their first major single, Babymetal × Kiba Of Akiba, ranked unexpectedly high on Japan's Oricon chart and quickly led to the girls playing shows at progressively larger venues, people taking to the unusual mix of Idol-pop vocals mixed with heavy metal riffs.

In 2013, when Suzuka graduated from Sakura Gakuin, Babymetal was spun off as an independent unit in order to keep Su as lead singer. For the next two years, until their own graduations, Yui and Moa performed as members of both groups. Sometimes this resulted in scheduling conflicts.

Beginning in 2012, sporadically at first but permanently from 2014 on, the girls are backed while performing by the Kami Band. While its lineup is not fixed due to availability issues, some of its members are almost guaranteed to be onstage at live shows.

Babymetal has toured internationally every year since 2012*  (though the only performing they did in 2012 and 2013 outside Japan was at conventions in Singapore, Jakarta, and Taiwan; 2014 was the first year they did a true international tour), and sold out almost every venue they have headlined. The girls hold several records in Japan and elsewhere as the youngest group to play at [insert venue or show here]. They are to date the first and only Japanese group to headline London's Wembley Arena, as well as to perform on American late-night television during The Late Show with Stephen Colbert. They are also the first Japanese act to make it onto Billboard USA's main Top-40 list since 1963note the last being Kyu Sakamoto with the jazz hit "Sukiyaki" with their second album Metal Resistance.

In addition to their headline shows, which can range from the stripped-down (most of their foreign shows plus 2017's Five Fox Festivals) to the incredibly elaborate (Budokan, Trilogy, Tokyo Dome, Hiroshima), they have also served as opener to several bigger acts they have met and sometimes become friends with during their travels to various music festivals over the years. This includes Lady Gaga, Metallica, Red Hot Chili Peppers, and Korn. They have also collaborated with DragonForce (with whom they are close), Sabaton, and Rob Halford of Judas Priest. The undeniable musical chops of the Kami Band coupled with the professionalism and pleasant personalities of the girls has led to the group earning the approval of many of the top names in metal and hard rock.

Babymetal, like any band, has also suffered setbacks, most notably in December 2017 when Yui was forced to pull out of Suzuka's 20th birthday concert due to an undisclosed medical issue which eventually lead her to officially withdraw

from the band in October 2018. Her absence was followed by the death in January 2018 of Kami Band lead guitarist Mikio Fujioka. Since then, the group has adopted the mantra "Just Keep Moving Forward" while they, aesthetically, spent the entirety of 2018 in a self-proclaimed "Dark Side" period.

In 2019 the question of how to replace Yui was resolved for the time being by filling her empty slot with three rotating and theoretically anonymous "Avengers" who made first-appearances at shows between June and August 2019. Of course it took about a millisecond for fans to identify them. They are, in order of debut:

All three Avengers took fans completely by surprise for various reasons. Though almost no one saw them coming, they were warmly and often enthusiastically received in preparation for the band's major two-stage world tour.

As to what the future holds for Babymetal? Well, Only The Fox-God Knows!

The group also provides the theme song for the Unikitty! cartoon.

Compare and contrast to Kyary Pamyu Pamyu for a similar Internet phenomenon. Along with Perfume, which is also an Amuse act employing choreographer Mikiko-sensei. More info about the girls themselves can be found on the Character Sheet of their former parent group, in the 2013 (Su) and 2015 (Yui/Moa) Graduates sections.