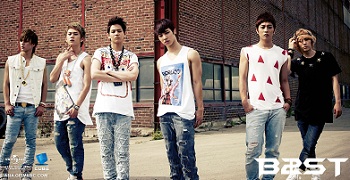 Beast, also stylized as B2ST, is a six member boy band from South Korea that debuted in 2009 under Cube Entertainment. Their original name came from shortening "Boys 2 Search for Top", and their current name comes from both "Boys of the EAst Standing Tall" and the phrase "So beast".

They were originally known for having members who have either already debuted as singers or almost did so in other groups that then went on to find fame without them. However, over time, Beast has managed to strip away the titles of the "reject group" and "recycled group" that they were originally labeled with and gain respect as excellent idol singers with a penchant for fanservice of the hoyay variety.

Former member Hyunseung left the group in April 2016. In 2017, the five remaining members moved from from Cube Entertainment to Around Us Entertainment and renamed themselves as Highlight.

This page is not ober!