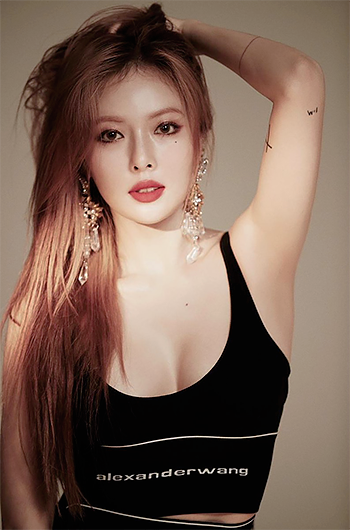 Hyuna is a popular K-Pop idol and rapper best known as the face of the idol group, 4minute, as PSY's love interest in his super-hit "Gangnam Style" and for her solo success, thanks to her catchy songs and sexy image.

Born Kim Hyun-ah on June 6, 1992, she debuted as a member of popular idol group Wonder Girls in 2007. However, a few months after the group debuted, she pulled out of the group because of health problems.

She returned two years later as 4minute's main rapper, and released her debut solo single "Change" the following year, which is known for its memorable pelvic dance. Since her solo debut she has released three solo singles and two mini-albums.

After 4Minute's disbandment in 2016, she continued as a solo artist.

She became even more well-known for being that pretty girl in PSY's monster hit "Gangnam Style." They have since collaborated again in a handful of Sequel Songs and consider each other good friends.In 2018 after CUBE Entertainment kicked Hyuna and her then boyfriend DAWN (formerly E'Dawn) out of the label for dating each other in secret, PSY signed the couple on to his new record label P Nation

. The couple left P Nation following the expiration of their contracts in August of 2022, and in November of that same year Hyuna announced they had broken up

Tropes that apply to Hyuna and her music: