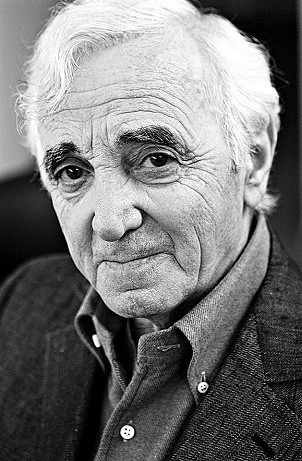 Shahnour Vaghinag Aznavourian, better known as Charles Aznavour (May 22th, 1924 – October 1st, 2018), was a French-Armenian singer, songwriter, composer, actor and activist. He was born in Paris within the Armenian diaspora that fled the genocide in the Ottoman Empire, and was granted Armenian citizenship in 2008.

He was a major figure of French Chanson, recording about 1300 songs in eight languages (including Armenian) over a career spanning 72 years. He wrote and co-wrote about 1000 songs for himself and for other prominent singers, including Édith Piaf. note He actually was Piaf's factotum for about eight years when he was young, without Piaf ever encouraging his burgeoning career. She did not believe in him unlike other young talents she supported such as Georges Moustaki or Yves Montand, but it didn't prevent him from rising to stardom, even outclassing either Moustaki or Montand in popularity and iconic status.

Aznavour also built himself a sizeable acting portofolio in about 80 movie and TV productions, which included Jean Cocteau's The Testament of Orpheus, François Truffaut's Shoot the Piano Player, Denys de La Patellière's Un Taxi Pour Tobrouk, the 1974 film version of And Then There Were None, Volker Schlöndorff's The Tin Drum and Atom Egoyan's Ararat. He also had a cameo As Himself in The Truth About Charlie and was the French voice of Carl Fredricksen in Pixar's Up.