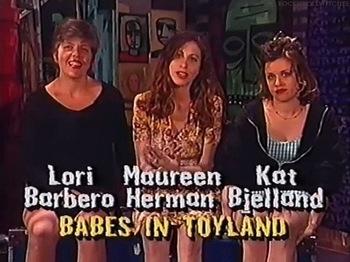 Babes In Toyland were an American punk rock band. Formed in Minneapolis, Minnesota in 1987, the band consisted of main vocalist and guitarist Kat Bjelland, drummer Lori Barbero, and bassist Michelle Leon (who would be replaced by Maureen Herman in 1992).

The band were huge influences on other musicians at the time, with Kat Bjelland's kinderwhore fashion becoming popular among female grunge bands and with some riot grrrl bands citing them as inspirations.Babes in Toyland released three studio albums: Spanking Machine (1990), followed by the commercially successful Fontanelle (1992), and the less successful Nemesisters (1995), before becoming inactive in 1997 and eventually disbanding in 2001. They reunited in 2014 and completed an international tour in 2015, before disbanding again in 2020.

Definitely not to be mistaken for the 1903 operetta also called "Babes In Toyland" or any of the films based on the operetta.