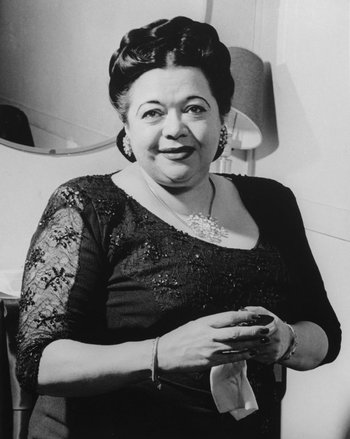 The Queen of Swing
Advertisement:

Mildred Bailey (February 27, 1907 - December 12, 1951) was a Native American jazz singer, known for her light soprano voice, clear articulation, and jazz phrasing. Raised on the Coeur d'Alene reservation in Idaho, She worked as a pianist in movie theatres, as a music clerk, and as a singer in speakeasies and by 1929, she was the vocalist in Paul Whiteman's orchestra.

Although, lesser known in the current era. She is generally lauded as one of the first non-black, non-white singers to have become a skilled jazz singer and one of the first Indigenous American jazz musicians at that. Given monikers such as "The Queen of Swing" and "Mrs. Swing" (to her husband, Red Norvo's "Mr. Swing"), in her heyday.

Her repertoire included swing standards such as "For Sentimental Reasons", "It's So Peaceful in the Country", "Doin' The Uptown Lowdown", "Trust in Me", "Where Are You?", "I Let a Song Go Out of My Heart", "Small Fry", "Please Be Kind", "Darn That Dream" and "Rockin' Chair". She gained the Fan Nickname "Rockin' Chair Lady" for her rendition of the titular song.