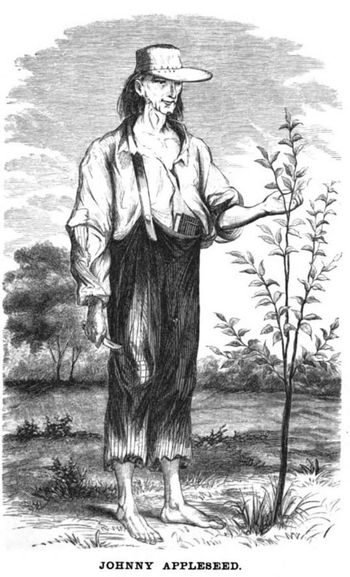 "I could not enjoy myself better anywhere—I can lay on my back, look up at the stars and it seems almost as though I can see the angels praising God, for he has made all things for good."
—Johnny Appleseed
Advertisement:

Johnny Appleseed is an American Folk Hero. Wearing a pan on his head, he traveled across the northern fledgling United States, planting apple trees left, right, and center for the American people to enjoy. Taking no money for himself, he did it entirely out of the kindness of his heart. He dedicated his life to wandering about the land, continuing this work for the benefit of all.

Or so the tales go.

In reality, Appleseed (born John Chapman, September 26, 1774 – March 18, 1845), was a horticulturist, shrewd businessman, and a missionary for the Swedenborgian Church,note A kind of hippieish Christian new religious movement founded in the mid-18th century by the Swedish theologian Emanuel Swedenborg after a series of strange dreams. We told you it was hippieish. who traveled across what is now Ohio and Indiana. He specifically left apple tree nurseries in the care of other farmers, and later returned to collect the profits of the tree sales. As he was frequently willing to accept barter goods or credit instead of money, he was never very monetarily wealthy; most of his wealth was in the frontier land that he had claimed as his own. And he owned a lot. His will left over 1200 acres of land to his sister, and had he pursued the legal rights, he could have owned even more.

His generosity and kindness were hallmarks of his character. He was known, when he received barter goods such as clothes as payment, for keeping the worst of them for himself and selling or trading away the better quality ones. He frequently entertained children with various stories he heard, and regularly promoted his own religion, often leaving pages from his Bible behind.

The majority of the apple trees he planted, incidentally, were of the crab-apple variety, mostly used in the production of hard apple cider. Hence a large part of his popularity during his lifetime came from the fact that he helped bring alcoholic drinks to the frontier, rather than the apple trees themselves, or their fruit.note It's basically impossible to reliably grow eating apples from seeds, because apple trees are extreme heterozyotes. It's done through grafting, which Johnny was opposed to.

As a Historical Domain Character, he shows up quite often in folklore, and in some other forms of fiction as well. Most fictional accounts of the man have a tendency to Disney-fy him, emphasizing his personal poverty and generosity, and downplaying his religious views and mercantile accomplishments.

Either way, his influence is felt to this day, as many tales and stories indicate. Oh, and a type of apple is named after him.