Film / The Testament of Orpheus 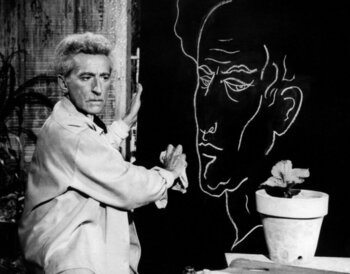 The Testament of Orpheus is a 1960 film directed by Jean Cocteau.

This very weird film was Cocteau's last, and it was deliberately made as such, his farewell to cinema. Cocteau stars as...Jean Cocteau, who has somehow become Unstuck in Time and is traveling the time-space continuum dressed in a Louis XV costume. After appearing and disappearing and startling several random strangers (all of this taking place on a bare soundstage), he meets a professor who has invented bullets that travel faster than light. Cocteau asks the professor to shoot him, and the professor does, and that works, as he stops time-warping and again becomes Jean Cocteau in 1959.

Things are still weird, though. Cocteau goes wandering around the coast, and accidentally summons Cegeste, a character from his 1950 film Orpheus. Cegeste tells him he must give an offering to the goddess Minerva (Claudine Auger). But before he can do that, he meets two other characters from that film, Death and Death's sidekick, Hertebuise. They put him on trial for attempting to travel to another world.

And that's just some of the weirdness, which also includes pallbearers dressed as horses, a Sphinx, mystical flowers and cameo appearances by Jean Marais, Pablo Picasso, Charles Aznavour, Jean-Pierre Léaud and Yul Brynner.