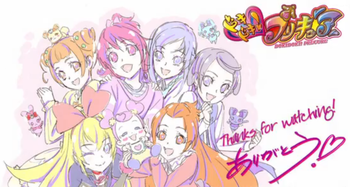 "Thank you so much for playing my game!"
— Mario, many, many times
Advertisement:

Closing Credits which among other thanks, thank the viewer for watching/reading/playing. Can address the viewer directly in second person ("Thanks to... YOU"), or refer to them in the third person. ("Thanks to all our viewers/everyone who read my comic/etc.") Often seen as part of a work's Grand Finale, though it is not limited to such. It might also be an Every Episode Ending, especially if the show uses Fake Interactivity. This is sometimes also the last element in Special Thanks.

When viewers are thanked specifically for financial support, that's Viewers Like You. note  In 1999, the respective Trope Namer, PBS, mandated the combined use of both tropes on its air. For Video Game characters Breaking the Fourth Wall to acknowledge your assistance, see Addressing the Player and The Player Is the Most Important Resource.

Thank you for the Examples: