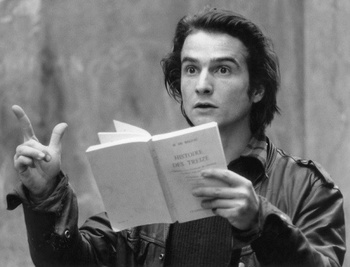 Jean-Pierre Léaud (born 28 May 1944 in Paris, France) is a French actor, considered to be one of the leading acting figures of the French New Wave.

Although he had appeared in a previous film (La Tour, prends garde!) in a minor role, his film career truly took off at the age of 14, with him answering an ad placed by François Truffaut. Léaud would beat out over a hundred other teenagers for the role of Antoine Doinel in The 400 Blows. Léaud and Truffaut would grow close over the filming, with Truffaut becoming Léaud's guardian after the latter was expelled from school and kicked out of the home of his foster parents. Léaud would go on to become Truffaut's most famous collaborator, reprising the role of Antoine Doinel in four more films, and starring in two non-Doinel films by Truffaut.

Léaud would go on to work with other New Wave directors throughout the sixties and into the seventies, engaging in multiple collaborations with Jean-Luc Godard and Jacques Rivette, and also starring in Jean Eustache's controversial The Mother and the Whore. He would begin to work more sporadically after the the early seventies and into the eighties, until he eventually experienced a career renaissance in the nineties, with young filmmakers such as Olivier Assayas and Aki Kaurismäki casting him as a way of paying homage to the New Wave films that influenced them.

In 2016, he was awarded an honorary Palme d'Or, an honor usually reserved for directors.