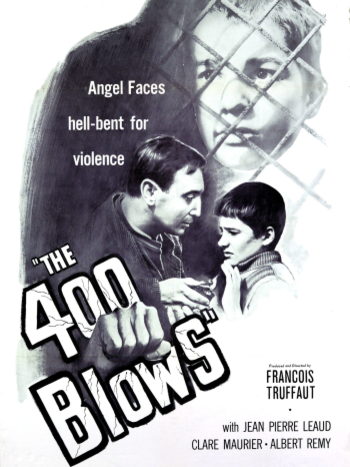 Antoine Doinel (Jean-Pierre Léaud) is a twelve year old boy living in Paris. His life is not a happy one. The family is poor. His parents constantly fight; his mother is having an affair. Their attitudes towards their son range from neglect to indifference to scolding. At school, Antoine is always getting into trouble, which leads him to rebel against his strict teachers, which leads to him getting into more trouble.

Antoine's best friend René encourages him to skip school. They play hooky for a day, which only gets Antoine into more trouble when he tells the school that his mother died, but gets caught in the lie. Finally his mother cuts him a break, acting nicer to him and promising him 1000 francs if he does well on an essay he has to write for class—but that only leads to further disaster.

The 400 Blows is commonly regarded as a landmark of the French New Wave. The huge success of the film established Truffaut as one of the leaders of French cinema. It was followed by four more films recounting the life of Antoine Doinel over the next twenty years, all starring Jean-Pierre Leaud, collectively referred to as The Adventures of Antoine Doinel. The other films in the series are considerably Lighter and Softer.